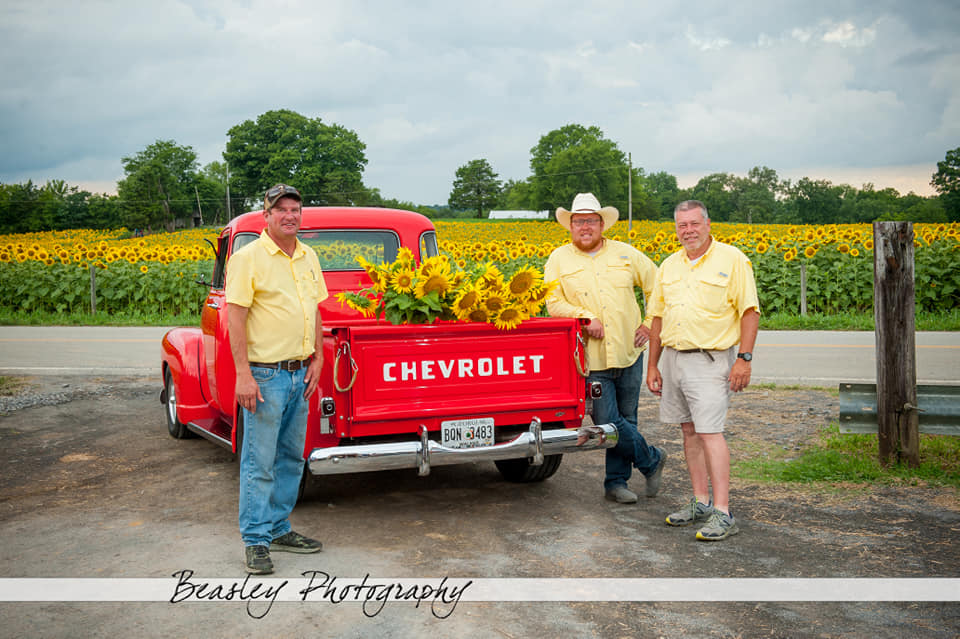 Smith-Perry Berries is a joint venture between farmers Aubie Smith and Bill Perry. Both have known each other for 30+ years and been there to help each other with the hardships of Farming part time and working full time jobs.
For years we have brought to market Beef, Corn, Soybeans, Hay and Sunflowers since 2008. In 2017 we set a new mission of bringing people back to the country and always leaving with a smile.
October 2017 we planted our first 15,000 strawberry plants. All winter and spring we had to uncover and recover the plants to protect from the frost. With the help of Friends, Family and neighbors we were very successful with keeping the plants safe and letting the blooms develop starting in late February. 40 days later on April 21st we opened to the public for the first time. Day after day we had customers come to pick their own strawberries. A fun and relaxing atmosphere made the back aching from bending over picking hurt a little less. We had families come back again and again bringing us goodies they had made with the berries and validating that we had grown a berry that was superior to the super market. One family took home over 50 buckets during the course of the season just because they were that good and needed to share with friends and keep the freezer full.
We felt very humbled by the support we received from the community that we felt a need to give back. We partnered with the Mary Ellen Locher Foundation Scholarship fund to provide scholarships to kids going to college who have had parents affected with cancer. During strawberry season we have pink baskets and donate part of the revenue of each bucket to the foundation. Again during the Sunflower season we partner with the foundation to donate from the pink buckets sales.
Sunflower season is unfortunately not long enough. The flowers last a very short season of just 10 to 14 days. With the sunflowers we decided to try something new and plant some wildflowers to pick as well. These turned out awesome to add color to the mix.
Sweet corn is a crowd favorite every year but sells out quickly so be sure to watch when it is available. It tastes just as good out of the field raw as if you cooked it.
Pumpkins come in starting late September. All sizes to choose from. Hay bales and cornstalks are ready for all of your decorating needs once the pumpkins are ready to be picked. During pumpkin season we have many activities to do along with the pumpkin picking. Hayrides, Cow trains, slides, duck races and more.
Be sure to check out the Barn art that is on our north barn made up of pieces that have broke or been taken off of harvesting equipment. We put this together so people could see what kind of work goes on behind the scenes and after dark.